“The twenty-first century will be how you young people will want it to be and will make it.

After so much violence and oppression, the world needs young people capable of “building bridges” to unite and reconcile.

After the culture of man without vocation, men and women are needed who believe in life and accept it as a call that comes from above, from the God who calls, since He loves.”

At present, there are eight seminarians studying for the Diocese of Meath – five in St Patrick’s College, Maynooth and three in the Irish College, Rome.
Please keep them in your prayers.

If you are interested or have questions about service as a priest in the Diocese of Meath, why not make contact with our vocations director? 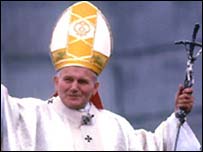 Venerable Brothers in the Episcopate,
Dear Brothers and Sisters,

We regret to announce the following deaths

Our Parish in Pictures

Next weeks Jackpot is